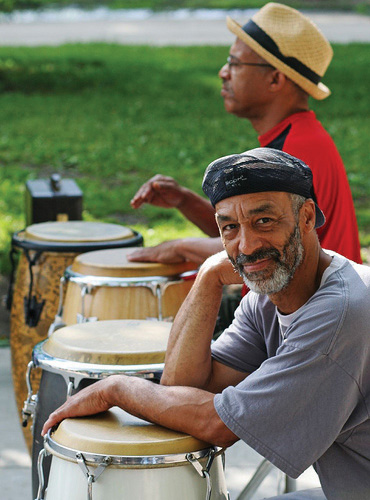 Every evening at dusk, a group of drummers form a circle in front of the 63rd Street Beach House on Chicago's South Side. "They just know to come," said Rick Taylor, a drumming teacher, who has been part of the circle since 1983. "There is no organization." The drummers have been meeting here daily for the last 40 years, when the weather permits, of course.

"The circle is here at 63rd Street because of the nearby communities. Most of the drummers come from South Shore, Hyde Park and Kenwood," said Marcus Lenton, a construction manager, who has been coming to listen for 30 years and has many friends in the circle. Many in the audience join the circle after enjoying the nearby beach. Because the drummers don't play in a formalized amphitheater there is no need to reserve the space – something that fits perfectly with the circle's spontaneity.

The place where the circle forms is nothing special: the drummers set up over a wide stretch of sidewalk that leads from the parking lot to the Beach House entrance. Without the drumming community, this space would be just another silent, unused path. Instead, it comes alive each night when the group sets up between a colonnade of tall tree trunks on the east and low, full bushes on the west. The trees are the only fixtures that trace out a loose boundary for the group, separating the circle from the vast grassy lawn where picnickers spread out their blankets. The trees make the circle feel complete and protected, but also natural and unplanned…almost like a camp- fire site where the beat is the flame.

Lenton said the circle is great exactly because nothing has been built to host it: "There are no additives, it's totally natural." He was adamant about keeping it that way. "I wouldn't change a thing. Don't build anything. It would ruin it. It's got to be spontaneous."

A single drummer, explained Lenton, is enough to start the circle. Pretty soon, without fail, others set up chairs and instruments near the trees. The circle is widest and loudest just before nightfall and continues until around 10:30 when, according to Lenton, "the cops break it up" in time for the park to close at 11:00.

The circle is open to everyone. "If you can catch the beat, you can join in," explained Lenton. The drummers are a mixed group. "Some went to school for it, some just picked it up recently, and some were brought up doing it their whole lives."

Even though everyone calls the gathering "the drum circle," it's not limited to one kind of instrument. Some people shake maracas or tambourines; others play the trumpet and saxophone, while some just clap, sing, and stomp their feet. Even the police officers who walk this beat clap along and nod their heads from their places along the circle's periphery.

Kenyatta Jackson, who plays several kinds of drums in the circle, said he comes because the circle provides a "release for us as drummers and as human beings. It's a way to maintain our lives, day-to-day." It's also a community center: "[The drum circle] brings all the generations together," said Edward Phillips, Lenton's friend, "this is our common culture. It's like we all found our home here."

Jackson said a rule of the circle is "no drinking, no drugs, no profanity, and no arguing." As long as there are drummers, he said, "it's safe here. Check the police log if you want, but I can tell you there are no violent crimes when this circle is around." Taylor added, "Anytime you have music, anytime you have rhythm, the place starts getting crowded. It just builds and builds."

..♪♪ is a social network